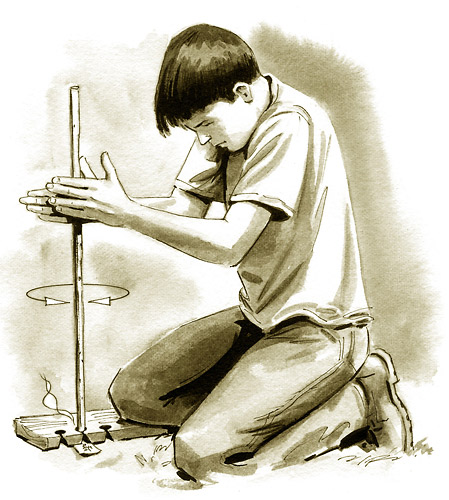 I suspect that the theme behind most of my artwork can be found with a reach back down the rabbit hole, with a grab for the magic that filled the world when I was a ten-year-old. Hiding in that dark recess were all the murky mysteries of nature, sex and death innocently wrapped and bound in the hand-drawn maps of our childhood escapades. When I was ten, the whole world was a wild frontier, and the screen door slamming behind me just the prelude to the next adventure.

Colorado’s Eastern Slope is hot in the summer. There aren’t many trees and not much shade. We roamed the foothills in ragtag squads of four or five, armed with BB guns and slingshots, canteens on out belts. Our backyard was twenty-five square miles of open prairie and the only limit to our wandering was an admonition to be home before dark.

One day, off in a new direction, we stumbled upon a deep gulch snaking through the buffalo grass, a raw gash in the earth unnoticed until we stood at its edge. Without a word we slid down the embankment to investigate. It was cool and shady at the bottom, exotic with a tiny trickle of a creek.

We found two wondrous things that day. The first was a long-dead cow, belly up, that had died by either, (a) falling into the gully, (b) drowning in a flash flood, or, (c) giving birth to the calf that was still stuck halfway out into the world. Both the cow and the calf had been gnawed on and pecked at by the coyotes and magpies and were now just a lot of mummified leather and bone. The translucent skin stretched across the cow’s ribcage looked like the canvas and wood wing of a Fokker tri-plane. The other thing we discovered that day was the cave.

Partway up the gully wall was an opening just big enough to crawl through. Once inside we could stand. A niche carved near the entrance held a band-aid box with candles and matches which we promptly lit, revealing a chamber about ten feet by six. Crude anatomical drawings were etched into the dirt wall, creepy in the candlelight, and there was a lot of stuff – a woman’s wig, a crucifix of bones and shells, an armless Barbie, a pile of feathers. A second, smaller room, lead off to the right where we discovered a milk crate full of old Playboy magazines.

Inspired, we returned the next day armed with flashlights, trowels and a geologist’s pick — a child’s urge to dig holes in the Earth is one of the great, unexplained forces of nature. By the end of the summer we had added another room and a twenty-foot tunnel going straight back into the embankment. When we weren’t digging, we smoked cigarettes rolled from newspapers and dried weeds, thumbed through the Playboys, or followed the edge of “Dead Man’s Creek” in search of snakes to capture and sell to the pet store. Fortunately for us, we never encountered the owner of the wig.

One weekend that fall after school had resumed we returned to the cave and found it had collapsed. What if, we wondered, someone was still in there, crushed and dead under tons of dirt. How horrible would THAT be. No kids were reported missing that fall, none that we heard of anyway, so probably not. But you never know.

I had no idea when I was ten years old where my life would lead. In retrospect I see that my childhood adventures that summer and in the summers that followed were perfect preliminary lessons in the education of an artist. Art is about far more than moving paint around on canvas to make pictures. It’s about trying to see what’s always hiding just out of sight. It’s about peering wide-eyed down the rabbit hole, summoning all of your tricks and skills to coax a ghost from the shadows.